The Stockton City Council meets on Tuesday evenings at 5:30 p.m. in the City Council Chambers at City Hall, 425 N. El Dorado Street, 2nd Floor. There is at least one regularly scheduled meeting each month. Study Sessions and Special Meetings may occur on Tuesdays or other days of the week.

For a schedule of meeting and potential meeting dates, please view:

Members of the public are welcome to attend City Council meetings. Meetings are also streamed on the City of Stockton website and can be viewed on local area cable Channel 97.

No more than two terms as Mayor or Councilmember. However, service prior to January 1, 1989, does not disqualify any person for further service.

The City Council Members are elected officers identified in Government Code Section 87200 and file statements of economic interests with the City Clerk's office. Copies of the statements of economic interests filed by the City's elected officers may be obtained by visiting the offices of the Fair Political Practices Commission (FPPC) or the City Clerk.

The statements of economic interests for some state and local government agency elected officers may be available in electronic format on the FPPC's website. Please see External Links below for a link to the FPPC website. 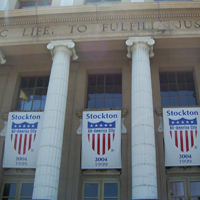