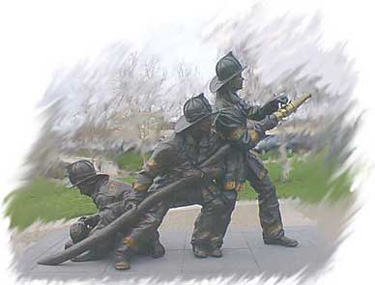 On February 6, 1997, the Stockton Fire Department suffered a tragic loss as two firefighters, Brett Alan Laws and Bryan Jacob Golden, gave their lives trying to save an elderly resident trapped in her two-story home.

This beautiful life-size monument was dedicated on October 11, 1998, and was previously located at McLeod Lake in downtown Stockton. The monument was designed and sculpted by artist Betty Saletta.

Around the base of the monument are the names of the 13 firefighters who gave their lives in the line of duty during the history of the Stockton Fire Department.

The monument has been removed and is being prepared for relocation.  For additional information about future plans, please contact Stockton Fire Administration.

Augustus Miller...On November 23, 1870, Firefighter Miller was run over by a team of horses from the Weber Engine Company while responding to a fire.

Frank “Pope” Kingsley... On September 10, 1877, as a member of the Weber Engine Company, he was thrown from the hose cart while responding to a fire.

Johnnie Williams... On July 22, 1886, as a member of the Weber Engine Company, he was thrown from the hose cart while responding to a fire.

David Farrell... On September 2, 1890, while attempting to jump onto the moving hook and ladder truck en-route to a fire, Firefighter Farrell lost his grip and was run over by the rear wheels.

Christopher J. Wolf... On February 13, 1900, Firefighter Wolf fell through the trap door where the sliding pole was located.

Tom J. Walsh... On September 29, 1902, Firefighter Walsh was fatally burned as he attempted to drive the horse cart between two burning structures.

Joaquin Castello... On February 2, 1912, Firefighter Castello fell to his death through a trap door at the Weber Engine Company.

Alexander Vint... On July 4, 1918, Firefighter Vint, from the Rose Street Engine Company, was electrocuted while fighting a fire.

John P. Fifley... On July 17, 1930, Firefighter Fifley died after developing septicemia, secondary to pneumonia, due to smoke inhalation from the Peffer Music Company Fire in June 1929.

Loren H. Causey... On January 29, 1940, before the building collapsed at the Japanese Hall, Captain Causey along with other firefighters and policemen saved the lives of many and Captain Causey did not make it out alive.

Brett Alan Laws... On February 6, 1997, Firefighter Laws, a seven-year veteran with the department, was with the first arriving engine company and made an interior fire attack while searching for an elderly woman trapped inside her burning home. The second story of the home collapsed, taking the life of the elderly woman and Firefighter Laws.