In 2000, Archaeologists conducted an excavation of the Stockton city block bounded by Miner Avenue and Channel, Hunter, and El Dorado streets prior to the construction of the City Centre Cineplex block.  The project involved historical research and archaeological excavations.

Archaeologists found three deposits of intact archaeological materials clustered around Miner Channel.  The primary deposit consisted of the remains of a laundry operated by Chinese immigrants from the 1890s to the 1930s.

The project also provided information about the block's early history, and about the filling in of Miner Channel, which once ran through the block to McLeod Lake, in circa 1917.

After clearing the site for the Cineplex complex, archaeologists found the remains of a laundry on Channel Street run by immigrants from China in the early 1900s.

History of the Site 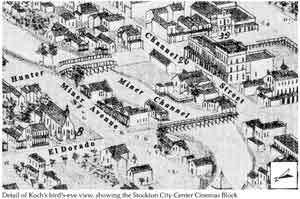 In the 1950s, the project block was close to the heart of Gold Rush Stockton, which was centered on the head of Stockton Channel.  The project area lay on the northern edge of the first Chinese community in Stockton.  Although identified as part of the Chinese quarter in Stockton, the area around the project block could be more accurately characterized as a multi-ethnic, urban neighborhood.

In the 1900s, Stockton was an important inland port for travelers and goods.  The laundry was near the waterfront, in an area of Stockton that had many services for travelers.  The laundry's neighbors were a hotel, a brewery, stables, a dairy, and another Chinese laundry.  While no archaeological features were identified on the site of the brewery, a deposit of bottles was identified that was most likely associated with the brewery.

Some families also lived nearby, in small houses along Miner Avenue.  Behind the Chinese laundry was a creek called Miner Channel.  During spring, this creek often flooded.  Around 1917, it was piped underground to stop the floods. 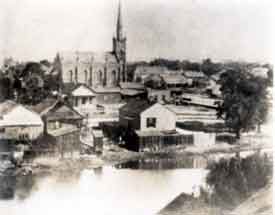 Digging deeper, archaeologists found artifacts that belonged to the Tretheway family, who lived on Miner Avenue in the 1870s.  The Tretheways were from England, and they had six children.  Mr. Tretheway was a carpenter.

Nineteenth century Stockton was a busy place to live.  It was the main port for goods and crops from the southern Central Valley.  The Tretheways' neighbors included other families and some businesses.

Chinese settlers first came to California for the Gold Rush.  Most were men who left their families in China and came to America to find work.  Many wanted to return to China when they had made enough money.  Chinese men worked as miners, railway workers, cooks, servants, laundrymen, fishermen and farm workers. 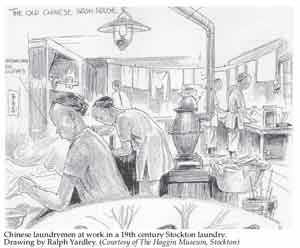 Early Chinese settlers in Stockton lived near the block where the City Centre Cineplex now stands.  They built a temple on Hunter Street.  The settlers worked in laundries, as servants, and helped to build the levees along rivers.  Later many of Stockton's Chinese settlers moved to East Washington Street.

During the 1880s, many Americans began to resent the Chinese.  In 1882, the U.S. Government signed a law (The Chinese Exclusion Act) that banned many Chinese from coming to this country.  In Stockton, townspeople tried to have Chinese laundries banned.  This attempt was not successful.

Life was still hard for the Chinese in the 20th century.  In Stockton, Chinese worked as laundrymen, in factories and on farms.  In the 1960s, the East Washington Chinatown was demolished when the Stockton downtown was redeveloped.

Today, there is a large and active Chinese-American community in Stockton.