A Look at Some of the Artifacts Collected

Archaeological investigations at the site on Weber Avenue produced over 1,800 artifacts.  These artifacts help to explain much about the different people and cultures that once lived in what is today the Stockton area.

When archaeologists study artifacts, they focus on what are called "diagnostic" objects.  For instance, a stone tool that is fashioned a certain way can be dated to a particular time period based on its style and shape.  The same is true for pottery, glass bottles, and even fishhooks.  An artifact that is in good condition (barely broken, if at all) with a distinctive craftsmanship is considered to be diagnostic.  It's these artifacts that allow archaeologists to understand how old a site might be and who was living there.

Take a look below at some of the diagnostic artifacts from the Weber Avenue site: 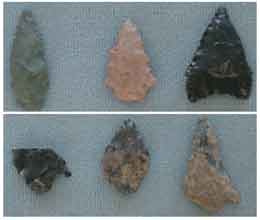 Twenty-one projectile points (arrowheads) were found at the Weber Street site.  Most of them were made from obsidian traced to sources in Napa Valley and Eastern Sierras.  This suggests that trade networks were in place and reached far and wide. (Source:  Pacific Legacy, Ltd.) 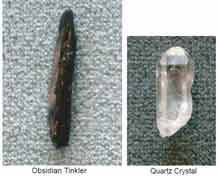 These are two special artifacts.  The black one is called an obsidian "tinkler".  They were valued for the "tinkling" sound made when one was hit against another.  Tinklers are commonly found in burial or ceremonial contexts.  The piece of quartz is also associated with burial ceremonies and shamans, who are often referred to as medicine men.

A range of baked clay artifacts were found at the site.  Bake clay "balls" were used to heat foods such as acorn mush.  Other baked clay objects were shaped into charm stones, spools or net sinkers.  The net sinkers shown in the photo were used to weigh fishing nets down.

Shell beads were traded throughout California and used as a form of early money, as jewelry, and as a burial item.

The artifacts pictured (below left) are called "awls".  Made from mammal leg bones, the purpose of awls was to puncture or pierce materials such as skins, shells, and reeds.  Eight awls were found at the site. 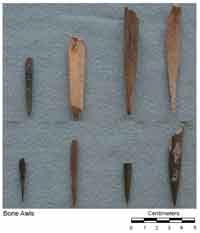 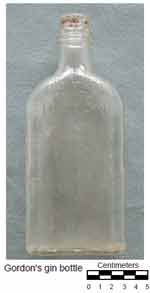 The glass bottle (above right) found at the site is called a "Dandy" flask.  It's a gin bottle from the Gordon's Dry Gin Company.  Based on the markings, the bottle was determined to be manufactured between 1935 and the 1960s, when the site had a warehouse on it.

A broad range of historic ceramics was found at the site.  Items found included broken dinner plates, teacup saucers, bowls and storage jars.  Ceramics can tell archaeologists a lot about how people ate and enjoyed social dinner parties a century ago.

The Weber Avenue site also revealed some personal artifacts.  Pictured below is a child's toy marble and what may be a piece of a necklace from long ago.

Below are relics from three tobacco pipes. Clay pipes like these are common artifacts found in American archaeological sites that date from the 18th century until the end of the 19th century when cigarettes became popular and clay pipes disappeared.

One set of interesting artifact types not found at the Weber Avenue site was milling equipment such as mortars and pestles. It appears that acorns and seeds were not prepared at this site, though they were a staple in the Native American diet in many other places.  Perhaps the rich food supply from the nearby river and marsh provided all these early residents needed.